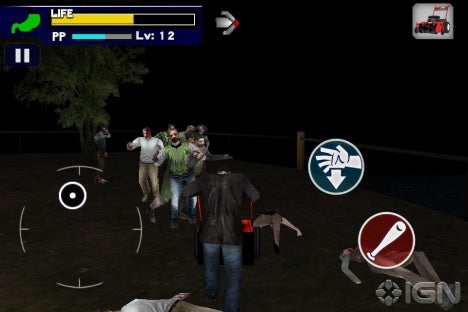 Dead Rising on iPhone presents a very similar experience to what you know and love about the first game. You still play as Frank (though Capcom hinted that it might release another playable character if the game is well-received) and you're stuck in a Williamette Mall that has been overrun by zombies. It's up to you to use any means available to kill them… again. While your surroundings and main character are the same, Capcom made it very clear that this version has been built from the ground up specifically for iPhone and iPod touch. So while the shopping mall setting is familiar, Capcom says that the events and story will be unique to the portable device.


The new connectivity option I mentioned before is one of the more interesting social networking options I've seen included in an iPhone game. Once you die in-game you have the option to place what's called a rescue call. This rescue call will be posted to either Facebook or Twitter (or both) and will appear on your friends' news feeds. From there they'll have to click on the link at which point they'll receive a password to input into the Dead Rising app. Doing so enables you to avoid the PP loss that others will sustain if they simply respawn without waiting for a rescue call to be answered. If no one picks up in a certain amount of time, you'll turn into a zombie that your friends will be able to spot and kill in their game (no, you won't have control over your zombie, you'll just respawn as normal).

I think I'd rather be rewarded for completing a rescue call than simply being allowed to continue onward without taking the PP hit, but the idea behind the mechanic is certainly solid and is a cool way to incorporate social networking into the gameplay.

Once I got my hands on Dead Rising I was instantly at home with the controls and gameplay. Things are still presented through a third-person perspective, but without a right analog stick. The left analog is assigned both the moving and the turning; something that could be problematic. Attacking is limited to one button, but you can carry more than one weapon at a time and each can be thrown at an encroaching pack of undead. In my short run through the mall I was able to find a toy sword, a lead pipe, a few benches and a bowling ball. They each exuded a different sound when they made contact with the evil zombies and had the same short lifespan that weapons are tied to on consoles (the number of available weapons will be nearly identical to what you're used to as well).

Dead Rising was clearly early as there were moments where zombies would disappear and textures would pop. The camera was also a bit annoying as it occasionally got stuck behind walls and other obstructions. Still, there's no denying that bashing zombies is as fun as ever even on an iPhone. I just hope that they can straighten out some of the nagging graphical issues before the game ships this holiday. Stay tuned to IGN for more info on Dead Rising on iPhone.
أنقر للتوسيع...

Capcom made it very clear that this version has been built from the ground up specifically for iPhone and iPod touch.
أنقر للتوسيع...